AAPL in 2021: From Wet Blanket to "Safety Blanket"

In June, Apple stock looked to be rotting on its vine. But looks proved to be quite deceiving!

Those familiar with the history of Apple, Inc. know the most valuable company on planet Earth didn't get there overnight. Created on April Fool's Day, 1976 and named by one of its three founders Steve Jobs, then a fruitarian who lived essentially off apples, the tech startup struggled for decades to find its footing after disastrous fails, stiff competition, internal disputes and so on.

In turn, the most challenging part about being early days Apple was maintaining faith in its future success. Remember who the company's third founding member was?

Probably not, because like the elusive "fifth Beatle," the third Apple Ronald Wayne left the company just days after its creation, taking a $800 payout of his 10% shares, which had he stayed, would be worth upwards of $100 billion today. Cringe!

Okay, so few traders have endured a missed opportunity of that magnitude. But we can all recall a time we've given up on a stock that was moving sideways for what seemed like forever -- only for it to break out to new records shortly after. And those times add up to incalculable "unrealized profits."

In fact, the Nasdaq-giant Apple, Inc. has proved to be a prime example of this in 2021. As this chart of AAPL shows, for the 8 months between September 2020 and June 2021, Apple was essentially rangebound in a painstaking sideways trend. 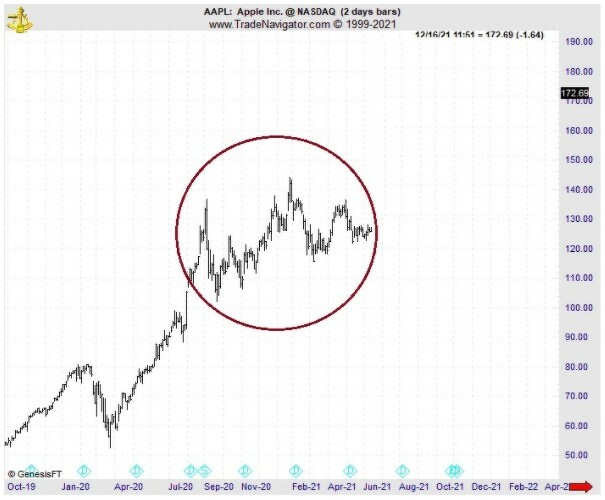 For traders, it was the equivalent of being in a dance marathon for some hoped-for prize, with participants dropping out by the hour who couldn't sweat the waiting any more. Especially since the mainstream crowd was telling them to give up on the stock amidst a perfect storm of pandemic-related bearish factors, such as:

"The tech wreck could continue as the reflationary environment will likely drive up bets on cyclicals.

"Tech has had its day in the sun. If the economy is going to recover and inflation starts to come out, the reflation trade right now makes sense."

For Apple specifically, the May 28 Barron's showcased a slew of analyst downgrades from "neutral" to "sell," forecasting a "30% drop" in Apple stock "if iPhone sales continue to slow."

And, after enduring 8 straight weeks of declines, this June 4 MarketWatch headline sets the broader bearish outlook to rest:

The fundamentals in Apple's backdrop were negative. Prices were going nowhere slow. And yet on June 8, our Trader's Classroom editor Jeffrey Kennedy showed this chart of AAPL and revealed that the seeds of bullish opportunity were about to bear fruit. 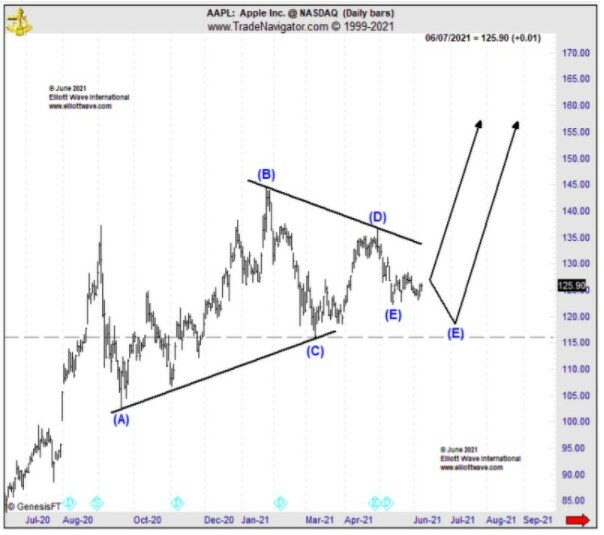 The very thing that convinced mainstream analysts of Apple's rot -- i.e., sideways price action -- was the same thing that bolstered Jeffrey's confidence in the stock's upside. Namely, that price action was the hallmark of an Elliott wave triangle, specifically a contracting triangle (pictured here, upper left) 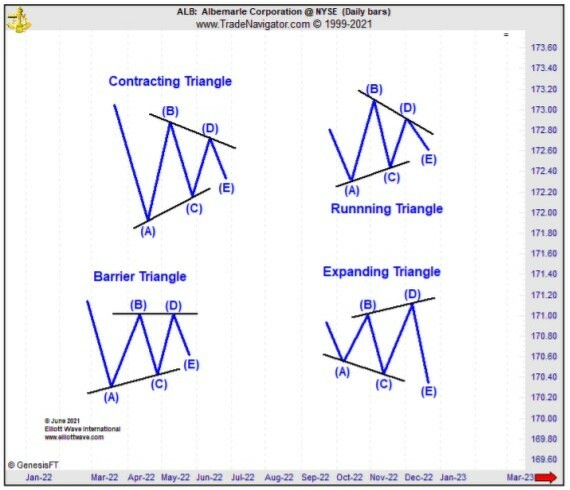 In Jeffrey's own words:

"I don't think there's an Elliott wave pattern more frustrating than the triangle.

"Simply put, the next time you think you've identified wave E of a triangle... wait. If there is a time to truly implement ready, aim, aim, aim, fire, it's when a triangle is taking shape.

"I think the most important aspect of a triangle is that it acts as a harbinger of a change in trend, which is why a triangle my only form by itself in the four, B, or X wave position. If you see a triangle taking shape, understand that the party is almost over. Triangles always precede the final move a sequence, so pay attention next time you see one"

"Once complete, you can count on price to thrust to a new extreme. Elliotticians refer to the move following a triangle as a triangle thrust."

Jeffery's June 8 Trader's Classroom forecast said APPL was at or near the end of its multi-month-long triangle. Thus, the stock's next move was going to take prices up -- way up!

From there, AAPL thrust out of its triangle and soared into the $150 zone. Then, on September 8, Trader's Classroom revisited Apple to confirm that the stock's upside was still very much intact. 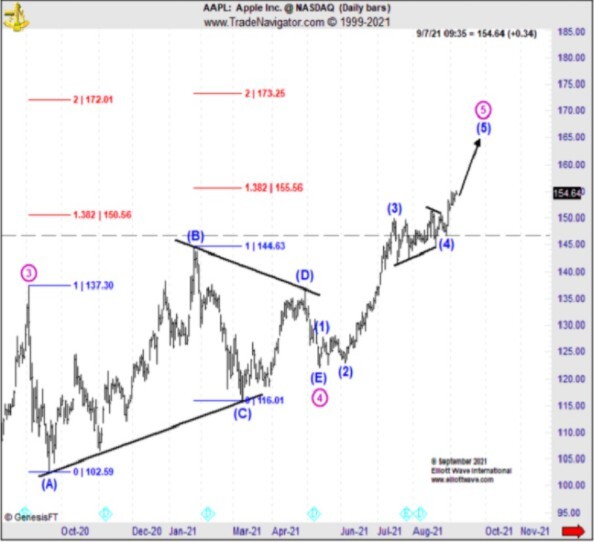 And, as this final chart shows, AAPL continued to rally right up to Jeffrey's initial target. 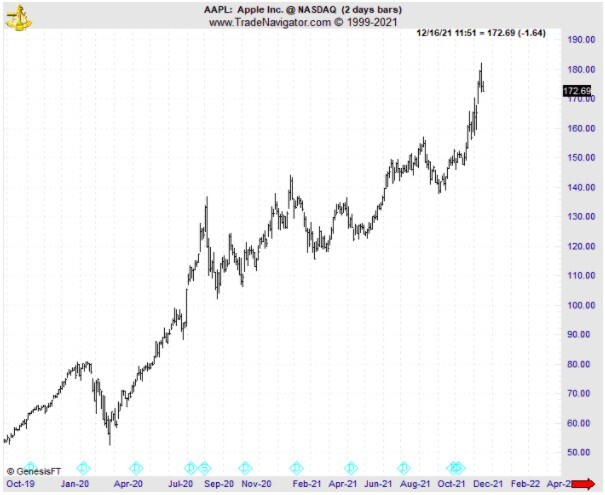 Today, mainstream experts hail Apple as the stock that won't quit. A December 9 The Street writes:

"Apple has been crowned a 'favorite idea' for investors for 2022 by one influential Wall Street analyst while being dubbed a 'tech safety blanket' by another... as the shares touch all-time highs, pushing the company's market capitalization to near $3 trillion."

We now know Apple didn't get here overnight. It took months of sideways price action for the stock to finally thrust to new highs. Trader's Classroom subscribers had the benefit of knowing after the long wait, opportunity would come.